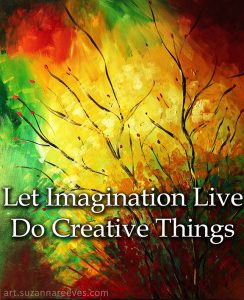 “After a certain high level of technical skill is achieved, science and art tend to coalesce in esthetics, plasticity, and form. The greatest scientists are artists as well.” Albert Einstein

Our imaginations and the ability to create is a part of us. Taking an idea, thought, or story from the mind and putting it into media that others can see, feel, or hear is an act of creation. Philosopher, Friedrich Nietzsche, said, “without music, life would be a mistake.” His statement speaks to both wonder and the significance and role of art within human life. Philosopher and Psychologist, John Dewey wrote, “Every great advance in science has issued from a new audacity of the imagination.”  Imagination is the castle where stories, thoughts, ideas, and songs germinate. Many of humanity’s greatest minds understood the importance and relationship of art to science and to humanity.

Write, draw, paint, play guitar, sing, dance, …do creativity. What is written, sung, played, or danced is important. Fill the world with wonder.

Happy Writing Wednesday! You do not have to let go

Writer Wednesday! 🖊️📚 To all the writers o

Happy New Year! May the new year bring you health

Happy Holidays! Joy and peace to all. 🎄🕯️