You are here: Home › Articles › Standing Stones in Texas

It’s weird how information so available now wasn’t years back. Without searchable information, some things became relegated to the status of a mystery. Without answers, the unknown became the substance of wonder, part of stories, songs, poetry, and more for me.

Years ago, on a random road trip to visit the Dallas area from my home in San Antonio, my ex and I stopped in Arlington. Visible from the highway were huge standing stones scattered around a natural area, a park. Of course, I had to see them. In the middle of a park with flowing fountains and waterways, monumental Celtic-looking stones circled the place in seeming random spots. Some had runes and designs, some were hewn, and some were taller than a building.  I think I may have found up to 10 of the large stones. Later, I found out there were 22! At the time, not much information was available about what they were or how they came to be there. Wandering among them, and left to my imagination, they were whimsical and magical.

Later on, I remembered my visit and tried to find out more about them (because no one I knew had any idea what I was talking about when I referred to them). It wasn’t until more recently that information was made available. It turns out that the 22 stones were designed and placed by an artist, but the installation had been removed in 1997. Thankfully, in 2009, the stones were reinstalled in north Arlington at Richard Greene Linear Park. 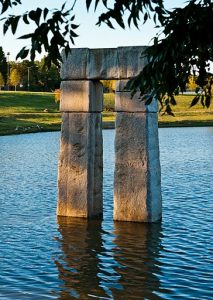 I hope everyone has the chance to walk and sit among them. As it is an inspirational place to spark creativity, wonder, and story.

Happy – Do 1 Creative Activity that Makes You Ha

How long have you been doing serious writing? . I

Write On Writers! . It’s Monday! Get up and writ

Make it Great! . It’s a rainy and cold weekend b

A professional dreamer and artsy soul who shares the creative (and writer) journey with others.

Happy – Do 1 Creative Activity that Makes You Happy..James W. Hall wrote, “It’s a great relief to me to know that I can actually be creative and be happy at the same time.”.Wait. What? I can be them at the same time?Don’t get me wrong, the soul of an artist (musician, writer, etc.) is intertwined with the need for creative outlet. There were many days that pouring out my tears and soul through music and art was the only refuge against pain. But we do grow and age as people and gain different perspectives and outcomes a long the way. Happiness does exist. When attaining success, it is my hope that as writers and creatives we enjoy it, and share posivity whenever we can..Reading my coauthor’s writing and contributions to our book series makes me extactic. His characters are the soul of our books. The happy and creative activity for me today is to keep writing, get them done, and make sure these works get out into the world..#mondaymotivation #motivatonmonday #mondaymood #writerslife #writingmotivation #ishouldbewriting #writewritewrite #writingmotivation #writelikeyoumeanit #finishwriting #suzannareevescreative #truehappiness #writing ... See MoreSee Less

Writer Wednesday!.“It’s not the writing part that’s hard. What’s hard is the sitting down to write. What keeps us from sitting down is Resistance.”- Steven Pressfield.Pressfield defined “Resistance” as all the self-sabotage we do ourselves. He also writes, “Turning pro is a mindset. If we are struggling with fear, self-sabotage, procrastination, self-doubt, etc., the problem is, we're thinking like amateurs. Amateurs don't show up. Amateurs let adversity defeat them. The pro thinks differently. He shows up, he does his work, he keeps going, no matter what.” Steven Pressfield..Even if you’re just starting out or are a few stories in, if this is something you want to do, then show up for your art, do the work for your characters, and keep writing and going so you can continue to show off the worlds you’ve created..#writerwednesday #writingwednesday #WW #writetip #amwriting #creativewriting #writing #writerproblems #writerslife #writetip #writingmotivation #ishouldbewriting #writewritewrite ... See MoreSee Less