The hero has been called to the  adventure of a lifetime. To do this,  she must first Cross the Threshold and leave her ordinary world behind. Crossing the Threshold means leaving what is comfortable, what is known, and what seems stable to venture into what is uncomfortable, unknown, and what looks precarious. The threshold is the boundary that exists between the original ordinary world and the new one, and often the way back will be cut off or destroyed. Crossing the Threshold is not a simple task, because it is also heavily protected by guardians; antagonists who mean business. Often, the brink has antagonists on both sides. These guardians test the hero, to ensure that she is worthy of the task and has the necessary strength and fortitude for the world beyond. The successful hero overcomes her fear, steps through  the boundary, and then is transformed. This hero’s journey is not unlike making the decision to have a successful creative career as a writer or artist. 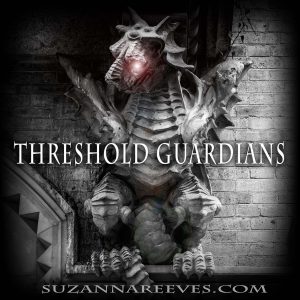 To venture on, the writer must take the necessary steps outside the norm, and face the Threshold Guardians. They will require the writer to leave behind what is known and comfortable and to drop old patterns and fears. To be a successful writer means in addition to doing the work of writing,  the writer hero must wrestle with these antagonists  on both sides. They will test the writer at every step, challenging her resolve, until she has been transformed by crossing into the new world of achievement and fruition, leaving the rest behind. Leaving means walking away from  what is known to embrace significant change and evolution.

The creative Muses have a vested interest in insuring that the writer has the fortitude to continue.  It is one thing to say she is a writer and maybe have drafts or WIPS, but it is another to emerge with success. The writer-hero’s journey requires action, effort, and real work.

“Lots of people want to be the noun without doing the verb. They want the job title without the work.”  Austin Kleon, about the saying, “I want to Become a Successful Writer”

Several successful authors have indicated that the air is rare and thin beyond the brink, not for the successful and wealthy authors, but for writers who can make it longer than six weeks or half a year. Successful writers don’t wait for everything to be perfect or wait for it all to fall in their laps, they suck it up, write, and complete works

The antidote to lack of success is to write and publish more.

Cross that threshold and don’t look back.

Happy – Do 1 Creative Activity that Makes You Ha

How long have you been doing serious writing? . I

Write On Writers! . It’s Monday! Get up and writ

Make it Great! . It’s a rainy and cold weekend b

A professional dreamer and artsy soul who shares the creative (and writer) journey with others.

Happy – Do 1 Creative Activity that Makes You Happy..James W. Hall wrote, “It’s a great relief to me to know that I can actually be creative and be happy at the same time.”.Wait. What? I can be them at the same time?Don’t get me wrong, the soul of an artist (musician, writer, etc.) is intertwined with the need for creative outlet. There were many days that pouring out my tears and soul through music and art was the only refuge against pain. But we do grow and age as people and gain different perspectives and outcomes a long the way. Happiness does exist. When attaining success, it is my hope that as writers and creatives we enjoy it, and share posivity whenever we can..Reading my coauthor’s writing and contributions to our book series makes me extactic. His characters are the soul of our books. The happy and creative activity for me today is to keep writing, get them done, and make sure these works get out into the world..#mondaymotivation #motivatonmonday #mondaymood #writerslife #writingmotivation #ishouldbewriting #writewritewrite #writingmotivation #writelikeyoumeanit #finishwriting #suzannareevescreative #truehappiness #writing ... See MoreSee Less

Writer Wednesday!.“It’s not the writing part that’s hard. What’s hard is the sitting down to write. What keeps us from sitting down is Resistance.”- Steven Pressfield.Pressfield defined “Resistance” as all the self-sabotage we do ourselves. He also writes, “Turning pro is a mindset. If we are struggling with fear, self-sabotage, procrastination, self-doubt, etc., the problem is, we're thinking like amateurs. Amateurs don't show up. Amateurs let adversity defeat them. The pro thinks differently. He shows up, he does his work, he keeps going, no matter what.” Steven Pressfield..Even if you’re just starting out or are a few stories in, if this is something you want to do, then show up for your art, do the work for your characters, and keep writing and going so you can continue to show off the worlds you’ve created..#writerwednesday #writingwednesday #WW #writetip #amwriting #creativewriting #writing #writerproblems #writerslife #writetip #writingmotivation #ishouldbewriting #writewritewrite ... See MoreSee Less